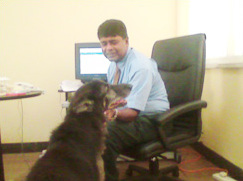 Rajiva Wijesinha, MA, DPhil (Sinhala: රජීව විජේසිංහ) (born 16 May 1954) is a Sri Lankan writer in English, distinguished for his political analysis as well as creative and critical work. An academic by profession for much of his working career, he was most recently Senior Professor of Languages at the University of Sabaragamuwa, Sri Lanka.

In June 2007 President Mahinda Rajapakse appointed him Secretary-General of the Sri Lankan Government Secretariat for Coordinating the Peace Process and in June 2008 he also became concurrently the Secretary to the Ministry of Disaster Management and Human Rights (Sri Lanka). The Peace Secretariat wound up in July 2009), and in February 2010 he resigned from the Ministry as well as the University, and became a member of parliament on the National List of the United People's Freedom Alliance following the General Election held in April 2010, following which he was appointed a member of parliament.

He belongs to the Liberal Party of Sri Lanka, and has served as its President and leader, and also as a Vice-President of Liberal International. He is currently Chair of the Council of Asian Liberals and Democrats and was re-elected leader of the Liberal Party Sri Lanka on the proposal of the previous leader following the Liberal Party Annual Congress of 2011. He has travelled widely, including as a Visiting Professor on the Semester at Sea Programme of the University of Pittsburgh, and has published Beyond the First Circle: Travels in the Second and Third Worlds. Provided by Wikipedia
1

Lest we forget : the tragedy of July 1983
by Wijesinha, Rajiva
Published 2008
Call Number: Loading...