Paul Richard Thagard (; born 1950) is a Canadian philosopher who specializes in cognitive science, philosophy of mind, and the philosophy of science and medicine. Thagard is a professor emeritus of philosophy at the University of Waterloo. He is a writer, and has contributed to research in analogy and creativity, inference, cognition in the history of science, and the role of emotion in cognition.

In the philosophy of science, Thagard is cited for his work on the use of computational models in explaining conceptual revolutions; his most distinctive contribution to the field is the concept of explanatory coherence, which he has applied to historical cases. He is heavily influenced by pragmatists like C. S. Peirce, and has contributed to the refinement of the idea of inference to the best explanation.

In the philosophy of mind, he is known for his attempts to apply connectionist models of coherence to theories of human thought and action. He is also known for HOTCO ("hot coherence"), which was his attempt to create a computer model of cognition that incorporated emotions at a fundamental level.

In his general approach to philosophy, Thagard is sharply critical of analytic philosophy for being overly dependent upon intuitions as a source of evidence. Provided by Wikipedia
1 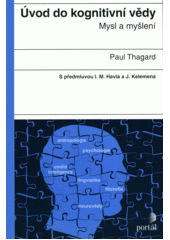