Roman graduated from Dartmouth College in 1952, where he was Editor-in-Chief of the undergraduate daily newspaper.

Roman joined Ogilvy & Mather in 1963 and served as Chairman from 1985 to 1989. In 1989, WPP plc, a British advertising holding company, acquired the Ogilvy Group for $864 million, which, at the time, was the most ever paid for an advertising agency. David Ogilvy initially resisted the sale, but eventually accepted the title of WPP honorary chairman, a position he relinquished in 1992.

After 26 years with Ogilvy, Roman joined American Express in a senior communications role before becoming a consultant, board director, and author. After his departure Graham Phillips became the chairman and CEO of Ogilvy & Mather Worldwide.

Roman is the co-author of two influentialbusiness books – ''How to Advertise'' and ''Writing That Works'' and the author of a 2009 biography of David Ogilvy entitled ''The King of Madison Avenue: David Ogilvy and the Making of Modern Advertising''.

He lives in New York City with his wife. Provided by Wikipedia
1 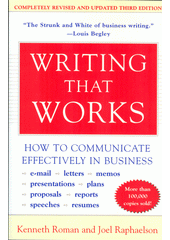