Benedict T. Casnocha is an American author, entrepreneur, and investor, based in San Francisco, California.

He is currently the co-founder and partner at the venture capital firm Village Global.

At 14 he founded Comcate Inc., an e-government technology firm, and is the author of three books, including the New York Times bestseller ''The Start-Up of You''.

He is a keynote speaker at many business events and conventions. He has appeared on The Charlie Rose Show and is a commentator on NPR’s ''Marketplace'' and in ''Newsweek''. He has also written for the American Enterprise Institute and the U.S. State Department. He has been a mentor at startup incubator Techstars.

In 2006, BusinessWeek named Casnocha one of America's best young entrepreneurs. Politics Online named him one of the "25 most influential people in the world of internet and politics."

In 2017, A member of Product Hunt 's founding team and a veteran from LinkedIn are teaming up to invest in companies at the early stage. For a new investment fund Erik Torenberg and Ben Casnocha are investing $50 million. Provided by Wikipedia
1 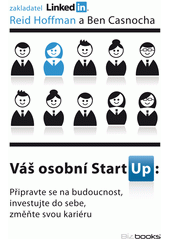