Jay Black (born David Blatt; November 2, 1938) is an American singer, also known as "The Voice," whose height of fame came in the 1960s when he was the lead singer of the band Jay and the Americans. The band had numerous hits including "Cara Mia", "Come a Little Bit Closer", and "This Magic Moment".

Black was born in New York City and grew up in Brooklyn in the neighborhood of Borough Park. In his later career, he has become known for touring New York State and Florida, singing, mainly solo, and preceding his singing with a stand-up comedy routine. Jay and his brother speak Yiddish fluently. In 1966, he recorded a Yiddish song "Where Is My Village" about the Holocaust. 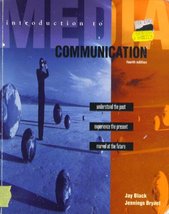 Introduction to media communication : understand the past, experience the present, marvel at the future
by Black, Jay, Bryant, Jennings, 1944-
Published 1995
Call Number: Loading...