Barsamian started working in radio in 1978 at KGNU in Boulder, Colorado and then KRZA in Alamosa, Colorado.

Articles by (and interviews with) Barsamian have appeared regularly in ''The Progressive'', ''The Sun'' and ''Z Magazine''. Barsamian also lectures on U.S. foreign policy, corporate control, the media, and propaganda. He is particularly well known for his interview series with Noam Chomsky, Arundhati Roy, Edward Said, Eqbal Ahmad, Howard Zinn, and Tariq Ali, which have been collected into books.

In 1986, David Barsamian took the initiative to do more than critique the media. Frustrated by corporate media's lack of progressive, radical voices, he founded Alternative Radio. Now aired on more than 250 radio stations, Barsamian's journalism is well-respected around the world for analyzing the world's most pressing social, economic and environmental problems and exploring possible solutions to them.

Barsamian was born in New York in 1945 to refugees who had fled the Turkish genocide of Armenians. He grew up with a strong interest in international issues, which developed further during an extended period in India in the 1960s. He regards that time as a major influence: "I was surrounded by some of that country's greatest musicians and poets. I learned so much, including Urdu, Hindi and Bengali. It was like getting a graduate education in South Asia." These early experiences gave him the cultural and political awareness that has been the foundation of his journalism.

In 1978, Barsamian volunteered at KGNU community radio in Boulder, Colorado. Over eight years at KGNU, he learned the essentials of radio journalism—listening, interviewing, writing, producing, on-air skills. He even edited reel-to-reel tape with razor blades and wax pencils. He hosted and produced two KGNU shows, "Ganges to the Nile," an international cultural program, and "Hemispheres," a political program. In 1986, he uplinked a two-and-a-half hour program with Noam Chomsky to the public radio satellite. Though most radio stations preferred half hour or one hour segments, a few stations picked up the program. That long conversation with Chomsky was the beginning of Alternative Radio.

Barsamian is critical of power in the U.S. and elsewhere, which has consequences. In 2011, at New Delhi airport, he was denied entry to India. Immigration officials forced him to return to the U.S., offering no explanation. Some theorize that he was blacklisted after broadcasting Arundhati Roy's criticism of India's treatment of people in Kashmir. Many prominent Indians spoke out against the travel ban, and Barsamian did as well: "This arbitrary action ... is not a sign of strength of Indian democracy; it's rather a sign of weakness. A healthy, vibrant democracy should include a rainbow of different opinions, different perspectives, and points of view and it should embrace those differences rather than seeking to impose a uniformity of thought and opinion." Since visiting Iran in 2016, he has repeatedly been detained and questioned at U.S. airports.

Founding Alternative Radio was Barsamian's personal attempt to meet the goals of public broadcasting: "to serve as a forum for controversy and debate" and "to provide a voice for groups that may otherwise be unheard." Because mainstream media oversimplifies debate and leaves out so many voices, alternative media outlets play a crucial role in American democracy. In Barsamian's view, "it was unacceptable that many of this country's greatest and most articulate radical voices had no forum on public radio. Alternative Radio was created to be the vehicle for progressive perspectives that are otherwise ignored or given short shrift."

After more than thirty years of AR, Barsamian continues to speak up for those who are unheard or ignored. Provided by Wikipedia
1 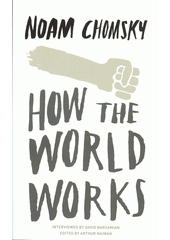